February 8, 2014 - A flash of light, a burst of sound, and the audience is jarred out of the saccharine, guilty pleasures of the 1970s music that precedes the curtain and into the beautiful mess that is Sideshow Theatre Company's The Golden Dragon.

Set in a Thai-Chinese-Vietnamese restaurant and its adjoining living spaces, this fast-paced production tells a complex tale of deceit, regret, food, and futility with an economy of language and an abundance of dark humor. The characters populating the globalized world of The Golden Dragon are cast with little regard for the gender, age, or ethnicity of the actors bringing them to life onstage. In the world of The Golden Dragon, people, relationships, and situations are far more complicated than they appear, and what lies beneath the surface can be shocking.

The cast of five capable actors transforms into nearly 20 different characters whose lives intersect unexpectedly—and in ways that perhaps the audience alone sees. A boy with a toothache, a couple in crisis, a shop owner with a secret...these and every other soul in this rich script are all one and the same: all so busy with life, that they fail to savor it as they go; all so fixated on life's challenges, that they inadvertently lose the payoff—or worse...they toss the most valuable rewards away.

Playwright Roland Schimmelpfennig's narrative, self-conscious writing allows the audience to take small bites from each character's story while blending all of these pieces into a startling climax. Combining a little bit of Brecht and a healthy dose of chamber theater, Schimmelpfennig's style is incredibly effective at establishing place, character, and mood. Within its brief one hour running time, The Golden Dragon moves from comic to dark to deeply disturbing. The quick pacing of the production is a testament to directors Jonathan L. Green and Marti Lyons' understanding of the piece and to the actors' ability to move effortlessly from one character to another.

The design and technical aspects of the production serve only to complement the efficient storytelling. John Kelly's lighting design takes us from the fluorescent reality of the kitchen at the heart of the play to the creepy, dreamworld of a secret warehouse just above the restaurant. The soundscape by Christopher M. LaPorte moves deftly from one environment to the next, and William Boles' spare scenery includes just enough detail to create an array of locations without any pesky scene changes to slow down the production's breakneck pace. The Golden Dragon is filled with as many technical challenges as a much more epic production, but all of the elements come together seamlessly under the stage management of Alison McLeod and Brittany Parlor.

The Golden Dragon plunges the viewer into a world where we're confronted with our greatest fears: powerlessness, meaninglessness, and the stark reality that perhaps we are all alone in the world. The reality is ugly, but The Golden Dragon shines in spite of it all. 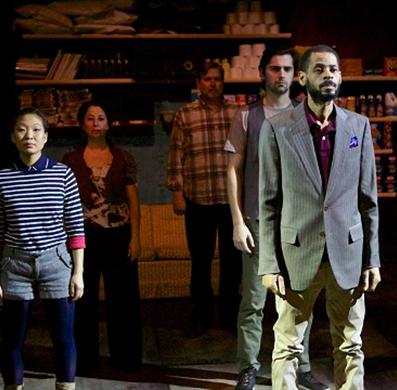