Are you one of the many Chicagoans who has missed the city’s favorite lovable dinosaur? Well, the wait is nearly over. SUE, the world’s biggest, best-preserved, and most complete T. rex, will be back on display and better than ever at the Field Museum on Friday, December 21. For the past year, SUE’s been undergoing updates to match the latest scientific research and being moved to a new “private suite” that shows what SUE’s world was like.

​“We’re excited to finally complete our decades-long plan to put SUE in a proper scientific context alongside our other dinosaurs and offer an experience that really shows off why SUE is widely considered the greatest dinosaur fossil in the world,” says Field Museum president Richard Lariviere.

SUE’s new home is within the museum’s Griffin Halls of Evolving Planet. The new suite is 5,100 square feet—bigger than a professional basketball court—and packed with interactive displays. “SUE’s gallery will give visitors a glimpse of the world SUE lived in,” says Director of Exhibitions Jaap Hoogstraten. “It’ll include cutting-edge animations showing how SUE would have interacted with other dinosaurs and what the landscape would have looked like. People will also get to learn about SUE’s discovery and the things scientists have learned about SUE over the last few decades—there’ll be lots of new information and experiences that we weren’t able to get across with the old display.”

“When SUE was in Stanley Field Hall, a lot of people would say, ‘Aw, SUE’s smaller than I thought.’ This new gallery does a better job showing how imposing SUE would have been in real life. This is the biggest, scariest, and most impressive SUE’s ever looked,” says Lariviere.

​And it’s not just the room—SUE will actually be bigger than ever before, thanks to the addition of a set of bones that flummoxed scientists when the fossil was first found. “T. rex had a set of bones across its abdomen called gastralia—they’re like belly ribs, and they helped T. rex breathe,” says Pete Makovicky, the museum’s curator of dinosaurs. “When SUE was discovered, scientists didn’t know exactly how the gastralia fit onto the skeleton, so they were left off. Thanks to the research we’ve been doing on SUE for the last twenty years, we now know what they were for and where they should go.” With gastralia added on, SUE looks a lot bigger.

“We can’t wait to reintroduce SUE to the world,” says Hoogstraten. “SUE is the crown jewel of the Field’s collections, and now we’re finally showing them off the way they deserve.”

The Griffin Dinosaur Experience, made possible by the generous support of the Kenneth C. Griffin Charitable Fund, includes a special traveling exhibition, Antarctic Dinosaurs; Máximo the Titanosaur; updates to SUE the T. rex and the Griffin Halls of Evolving Planet; and new dinosaur education programs. 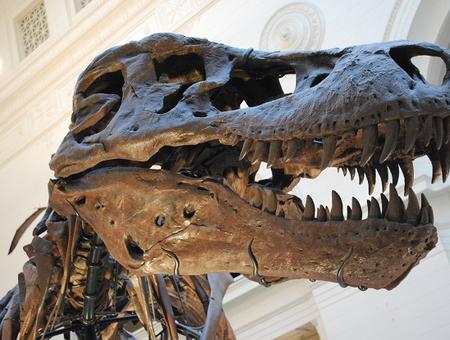