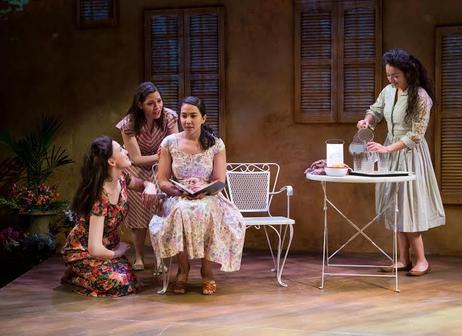 Teatro Vista's Flavia Martínez, Ayssette Muñóz, Rinska Carrasco, and Sari Sánchez in In the Time of the Butterflies, an adaptation by Caridad Svich of the novel of the same name by Alvarez (photo by Joel Maisonet).

Chicago’s premier Latinx Theater company, Teatro Vista, has announced that The Chicago Community Trust is a new supporter of one of the company's most ambitious productions in its 25-year history, next spring's world premiere of ensemble member Sandra Delgado's La Havana Madrid.

A $50,000 grant from The Chicago Community Trust will support the play's premiere in April 2017 at Steppenwolf's new 1700 Theatre as part of Steppenwolf's Visiting Company Initiative, and in particular, an extended residency at The Miracle Center in Chicago's Belmont Cragin-Hermosa neighborhood as part of Teatro Vista's new program, Teatro Vista, Teatro Vecino (Spanish for "neighbor"), which aims to bring the company's professional productions to neighborhoods with high concentrations of Latinos.

​La Havana Madrid is an immersive, documentary-style theater experience conceived and written by Delgado, based on the true story of the 1960s nightclub, La Havana Madrid, which once existed at Belmont and Sheffield in Chicago. Audiences will be invited into an intimate recreation of the lively 1960s music club, with cabaret seating, a bar, a dance floor and a small stage for a live band.

Together, the play's band and cast will chronicle the history of Caribbean Latino music through the decade, from mambo to the birth of salsa, all in a live, nightclub setting.

"La Havana Madrid is about recapturing a lost chapter in Chicago history, and as a born and bred Chicagoan, this play is my love letter to the city I cherish. So I am thrilled that The Chicago Community Trust will be an integral part of bringing La Havana Madrid alive for Chicago audiences," said Delgado, a Colombian-American actor, writer, and producer, well-known to Chicago audiences.

The show will debut April 14 through May 21, 2017 at the 1700 Theatre, Steppenwolf's newest theater, a casual, intimate and flexible 80-seat space dedicated to showcasing the work of its ensemble and local theater companies like Teatro Vista. It is located immediately behind Front Bar: Coffee and Drinks, Steppenwolf's new 2,5000-square-foot café & bar, making it an ideal setting for La Havana Madrid.

Tickets go on sale February 3 and are available by calling the Steppenwolf Box Office at 312.335.1650 or online at Steppenwolf.org.