Clued In: An Improvised Murder Mystery to Return to Second City's Beat Lounge 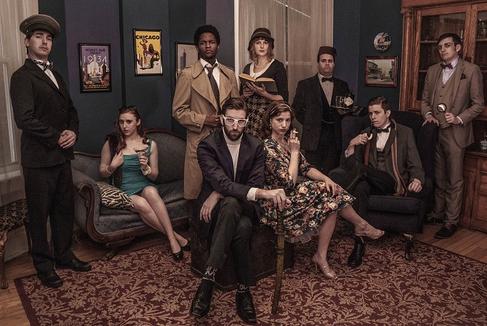 After a completely sold-out run in February, the popular improvisers behind Clued-In: An Improvised Murder Mystery are back at The Beat Lounge in the Second City Training Center with the show for an open run. The Beat Lounge is one of Second City’s newest performance spaces, and will be a place for young talent to create humorous productions that are experimental, innovative and hilarious.

Clued In is one act long form show that aims to deliver the intrigue of Agatha Christie with the skills of Chicago improvisers. The show will be a regular installation at the new theater, performing at 9:00 p.m. every Saturday.

After getting a single suggestion from the audience, a cast of six professional comedians designate a detective and create a tale of crime, secrets and scandals right before your eyes...but watch closely, the performers will keep track of their facts, follow leads and come to a conclusion unlike any comedy experience you’ve seen before, all while using the tropes, character archetypes and influences of Agatha Christie and other defining detective genre devices.

​Clued In pulls from the same cast and creators of Hitch*Cocktails, the long-running improvised thriller that has been enjoying and open run for four years at The Annoyance Theatre in Lakeview. The new Piper’s Alley theater is expected to allow the performers to expand their brand of intelligent, witty comedy to a new venue. The cast includes C.J. Tuor (UP Comedy Club, Second City Network), Cynthia Bangert (iO Theater Chicago), Caleb George (Hitch*Cocktails, Mission IMPROVable) and Bruce Phillips (Annoyance Theater, ComedySportz, Sideshow Theatre Company).

​Tickets to Clued In: An Improvised Murder Mystery are $13 ($11 for students, and $7 for Second City Training Center students) and can be purchased online at thesecondcity.com.