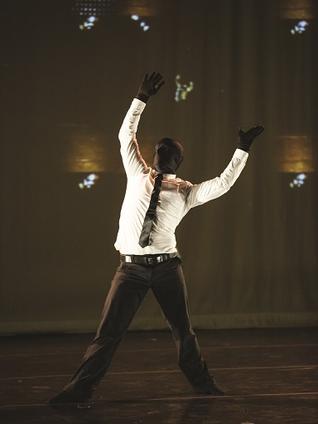 The Seldoms will bring ensemble member Philip Ellson's The Fifth to the Dance Center of Columbia College October 13 - 15, 2016 (photo courtesy of The Seldoms).

Achieving that “big break” just might be the first major accomplishment for one hoping for a long term career in dance making, and Philip Elson just got his. Elson, already well known in the Chicago dance community for his work as a student, performer, sound and video designer—and  educator—is getting his biggest chance yet to prove his dance making skills in October. A graduate of Columbia College Chicago, Elson will see his first major work on dance company, The Seldoms, produced on the stage of his alma mater this fall. Of the occasion, Carrie Hanson, artistic director of The Seldoms says, “The commission of Philip Elson’s new work marks a first for The Seldoms, wherein we are investing significantly in an emerging choreographic voice from within the ensemble.” After an eight year tenure with the company, Elson has already graced The Seldoms’ stage, making his mark as a dancer, but always showing promise as a creator too, he will now been given the resources needed to create the new evening length work. “We are making this commitment to express our confidence and interest in his art-making and honor his stellar contributions to my work during the past eight years,” says Hanson.

Well versed in the use of technology as a part time “Genius” at the Apple Store, Elson has used technology in his artistic work in the past. His 2014 work presented at Links Hall, Terms and Conditions, saw him as one of the first of a wave of dancemakers to live stream their productions to expand their reach to audiences who could not physically be at the performance. In its use of innovative technology, The Fifth, this newest work will be no different. In an announcement for the work, Hansen explains, “The Fifth takes a sweeping journey through virtual and real worlds, capturing covert activities of hacktivists, whistleblowers and players within the heated discourse about surveillance and privacy.” While many of these themes deal heavily in technology and its role in our lives, and in practice require an elaborate knowledge of how technology and the internet work, Elson explains that the work will actually shed a light on human instinct, human behavior and common themes that even the most anti-“genius” will be able to relate to: “I know people have a wide range of knowledge about this content. Some know more, some know less. This isn’t a lesson in how hacking and whistleblowing works. It’s a demonstration of people acting on their instincts, something we all know about.” This is particularly so for an audience member who knows little about the intricacies of the bigger theme. Elson assures that his impetus in choosing this subject is still something anyone can relate to: “I’m creating a work that shines light on voices that haven’t been heard and people that exist in real life. I’m not making a judgment about them. I’m revealing the human instincts that lay at the core of their actions.”

The work is fraught with Elson’s signature movement language, full of dynamic geometry, swift changes in direction and dancers engaged in multifaceted physical interactions. Sometimes these interactions are constrained by elastic bands, complicating their contact. Sometimes masked, dancers seem weaponized, “used as virtual political objects.” These “signature” movements and props help to color and create a livable, tangible world for the audience, and to bring the ideas surrounding internet anonymity to the dancing body.

​Having demonstrated his own technical ability in past works and collaborations, Elson could potentially run the entire technical side of the show all on his own, but points out this time around, he’s taking it all in stageside. “Yes, I have experience with sound design, video design, lighting and various forms of stagecraft,” says Elson. “I made the decision for this project that it is time to let go. My challenge in this process is being more of a visionary, sharing what is happening in my brain and trusting others to help bring that vision to life. I’m lucky to have a fantastic design team excelling in their own areas who are taking the ideas of this work and bringing them to life in their own original way.” First there’s Julie E. Ballard, lighting designer and technical director for The Fifth. Not only does she know her way intimately around the lighting board at Columbia College Chicago after her eight years as lighting director there, but she is now stage manager for world-renowned Hubbard Street Dance Chicago. Laura J. Wiley brings her video and production design expertise as the resident lighting designer for Idle Muse Theatre Companym and Jeff Award winner. Rounding out the impressive team are Cristobal Mitchell, a multidisciplinary artist who will focus on the sound design for The Fifth, costumer designer Vin Reed as dramaturg Tristan Brandon. For the new production, this group will be well interconnected and each understands that seamless collaboration will be key to its success. Says Elson, “My design team is closely linked, sharing our discoveries and explorations along the way. I’m not always a person that loves the element of surprise, but I am amazed in what my collaborators have engineered that I never would have dreamed of. I have so much trust in these people, and they have trust in my vision.”

​​Of course, beyond the technical team, every production has an ensemble contributing to the success of the work. “I can’t tell you how comfortable I am working with a group of people that know me so well. I’m not their boss. I’m their friend and peer.” Elson insists. The group, now with newer ensemble members Sarah Gonsiorowski and Tajh Stallworth has grown together to become known for their smart, sometimes witty and tight movement together. Many past works set on the company by Hanson have dealt with big picture political, socio-economic and environmental issues evident in our society, so The Fifth and Elson’s interest in tying big picture societal issues into his own work as a choreographer continues the company’s inherent trajectory. “Carrie and I have worked together now for eight years in several capacities. The fact that I’ve been with an organization this long is a testament to the culture and vision that Carrie has built,” Elson says of his relationship with Hanson. Surely their closeness and mutual trust have shown in Elson’s past performances as a dancer in Hanson’s work, and one can easily bet that her voice and influence will be visible at the Dance Center this October.

All other elements aside, perhaps the biggest excitement surrounding the piece is the “full circle” it creates for Elson and his community. “I couldn’t be happier to be making such a significant work in a place that is my home, with people I consider my dance family,” he told me. “At this stage in my career, emerging as a young dancemaker, it means the world to me that my community believes in my potential.  It gives me the determination and inspiration to work stronger and keep pushing forward.” And what more can audiences ask for than that?

The Seldoms will perform The Fifth October 13 – 15 at The Dance Center of Columbia College Chicago.

New commission by The Seldoms takes on the digital world in the physical space through movement. The new work, The Fifth, is the brainchild of ensemble member Philip Elson, and explores technology and its pervasive role in our lives today.