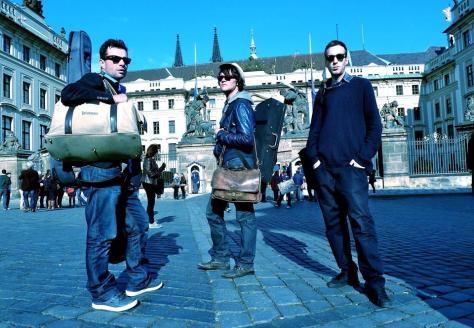 On September 18, Theatre at the Center in Munster, Indiana will present the internationally renowned musical trio, The Trouble Notes. An eclectic fusion of genres from every end of the musical spectrum, The Trouble Notes incorporates the different cultures and musical styles from around the world into an enchanting and unique sound. From the streets of New York to the international scene, the trio blends Gypsy fiddling, jazz and rock tunes to serenade the stages and streets of the world.

The Trouble Notes originated when violinist and Munster native Bennet Cerven joined musical forces with guitarist B-zy Brain in New York City in 2012. The duo embarked for London in June 2013, where they met percussionist and future Note, Oliver Maguire. Maguire brought a new beat to the group’s already eclectic sound. The trio released their first EP, Court the Storm, in August 2013 and most recently released their second EP worldwide in May 2014.

Prior to the concert on September 18, The Center for Visual and Performing Arts will host a pre-concert Culinary Night in the Dining Room. The “Bella Notte” dinner will begin at 5:30 p.m. and feature a cooking demonstration by CVPA Executive Chef Joe Trama at 6 p.m., followed by a four-course dinner and wine pairing by Certified Wine Educator Jay Fields. Advance ticket purchase for the event is required. For tickets or more information about Culinary Night, call 219.836.1930 ext. 2.

Founded in 1991, Theatre at the Center is a year-round professional theater at its home, The Center for Visual and Performing Arts, 1040 Ridge Road, Munster, Indiana.  The upcoming performance, which includes a post-performance meet-and-greet, is also sponsored by South Shore Arts, a regional arts organization that offers youth outreach, education for all ages, exhibitions and arts services, with its headquarters in the Center for Visual and Performing Arts in Munster.