June 23, 2014 - In Chilean-American playwright Ariel Dorfman’s riveting play, Death and the Maiden (now playing at the Victory Gardens Theater), the husband of a woman who had been tortured and raped while under interrogation by brutal officials in a “country that could be Chile but could be any country that has given itself a democratic government just after a long period of dictatorship,” asks her the seminal question that is at the heart of the drama: Just what would satisfy her? Revenge? Killing the man responsible? What?

Paulina, played by Sandra Oh, finally responds that the only thing that matters to her would be to hear the oppressor confess what he did and admit he was wrong.

But would that really be enough?

The setting is a beach house where Paulina lives with her husband Gerardo (played by Raúl Castillo). Paulina has struggled with the demons of her imprisonment and ordeal for 15 years, haunted by Schubert’s Death and the Maiden string quartet (because her torturer played the work while he raped her). One night, Gerardo, who is on the verge of an important political position in the new regime, brings home a man who helped him with a flat tire—a certain Dr. Miranda (played by John Judd)—whom Paulina is convinced is the man who tormented her. It’s his voice, his smell, and his skin that clue her in, as well as the cassette tape of the Schubert quartet in the man’s car. She pulls a gun, knocks him out, ties him to a chair, and proceeds to hold a “kangaroo” trial. Gerardo is as much under her thumb as the doctor. What follows in the ninety-minute tale is harrowing and cathartic.

Restorative justice is a term bandied about a lot these days, meaning that instead of simply punishing an offender for a crime, perhaps it is best to encourage the perpetrators to take responsibility for their actions. This is done in a number of ways—community service, reparations to the victims, or simply apologizing. At the same time, the needs of the victim are evaluated and hopefully fulfilled. All through the play, we wonder if Paulina is serious about her promise to let Dr. Miranda go if he simply writes out a full confession and signs it. In the final moments of the play, we are left with an ambiguous resolution—which is entirely the point of Dorfman’s work. Did his forced confession relieve her suffering? Was the confession the truth? Was this punishment enough?

Chay Yew’s confident direction places the piece on an imaginative setting designed by William Boles. The beach house set revolves so that the actors can step in and out through glass sliding doors onto a porch. All of the rhythms/tempos, and dramatic arcs are there; however the second half of the play struggled to break through rather subdued performances. If anything, the intensity level should have shot to near-unbearable heights. The shock value of Paulina’s act against Dr. Miranda was simply not powerful enough to shake the audience as intended. While Ms. Oh delivers an appreciably honest presentation and hits all the right emotional notes of a woman caught in a nightmare that, for her, never ended, her performance is perhaps too intimate. Both Mr. Judd and Mr. Castillo complement her energy level, although Castillo does burst through the intimacy at times to a level more appropriate to the drama of the action.

Yet and still, the power of the words themselves are enough to generate an engaging evening at Victory Gardens.

Perhaps the real star of the production is the lighting design by Jesse Klug. The effect of a car’s headlights pulling into an offstage driveway is impressive, as is the various tints of sunrise and sunset over the sea...truly breathtaking.

Death and the Maiden plays through July 20. Tickets are available at victorygardens.org or by calling 773-871-3000.

Death, the Maiden and Restorative Justice 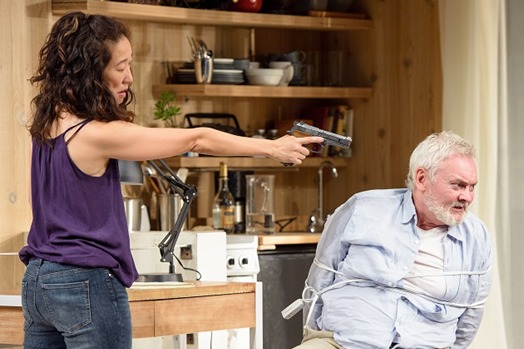