May 23, 2014 - A real-life game of thrones is front and center in Chicago Shakespeare Theater's (CST) Henry V, and CST's intimate Courtyard Theatre puts audiences right on the battlefield for all of the action. Passion, war, and plenty of leather are all part of the fun, and one of Shakespeare's most popular histories feels exciting, fresh, and as relevant as ever.

Henry V picks up where Henry IV leaves off, telling the tale of young, inexperienced Prince Hal (now King Henry) and his rise to power and glory at the battle of Agincourt. The stakes are high—life and death—and Harry Judge is incredibly solid in his portrayal of Henry and his drive to create a legacy for himself and for his country.

Though Henry's larger story is at the center of the play, it's the frame upon which Shakespeare builds lots of other characters who are all vying to steal the show, and CST's company of capable actors does a fine job of tackling that challenge and injecting humor and humanity into the production. Of note are Greg Vinkler, Bret Tuomi, and Larry Neumann, Jr. as Pistol, Bardolph, and Nym respectively. Their trio of bumbling soldiers is part Marx Brothers, part Three Stooges, and all fun. Likewise, James Newcomb's comic timing and honesty are the perfect combination for Captain Fluellen, and he has the audience in the palm of his hand every time he appears.

Though he's onstage for only a short while, one of Henry V's loveliest performances comes from young Kevin Quinn in his CST debut as The Boy. He's sincere, funny, and nuanced. While Quinn's stage time is brief, he makes a lasting impression.   The acting is strong, but Henry V is not short on spectacle. The costumes are stunning—lots of leather armor and a simple color pallet keep this grand epic grounded while helping to tell the story. The scenery is deceptively spare. One large, monolithic wall functions beautifully as castle and battleground. Plus, director Christopher Luscombe cleverly uses entire theater—aisle, audience, and stage—to create the environment and draw us right into the thick of things.

A big, important history play like Henry V wouldn't be complete without some spectacular battle scenes, and this production does a pretty good job in that department. The major fight in this play is The Battle of Agincourt, and all of the collaborators bring their A games. Violence design, lighting, sound, and direction come together seamlessly in the climactic scene, making it incredibly exciting to be a part of. Less cohesive and therefore less riveting is the Siege of Harfleur's famous “Once more unto the breach, dear friends” speech. Individually, the actors and technical elements are fine, building to that well-known line from King Henry, but the energy dips right before that important moment leaving us feeling a bit deflated. Regardless, the action on the whole was thrilling especially in CST's thrust configuration with the audience circling around the battle.

Henry V has a storied history at Chicago Shakespeare Theatre—it was the first play they ever produced. Nearly 30 years later, it continues to serve CST well in a production that is sure to be remembered as fondly as their inaugural triumph. 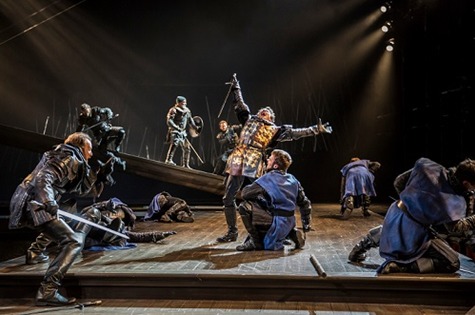