May 29, 2014 - A dingy 1940s tenement feels fresh and vibrant in Northlight Theatre’s delightful production of Lost in Yonkers. Set in New York during the Second World War, Neil Simon’s Tony and Pulitzer Prize-winning play tells the story of Jay and Arty—two motherless teenagers forced to live with their ill-tempered grandmother while their dad leaves town to work and pay off his debts.

“Did you ever notice there’s something wrong with everyone on Pop’s side of the family?” says Jay to his younger brother. Indeed, there is something wrong—and something wonderful—about all of the characters that inhabit the tiny apartment in which Arty and Jay spend ten long months waiting for their father’s return. All of those wrongs add up to teach the boys a lot about themselves and about what really matters in their world.

Simon’s cast of characters also creates some terrific opportunities for the collaborators on Lost in Yonkers to shine. This memory play comes roaring to life under the direction of Devon de Mayo. Comic timing, heartfelt moments, and even beautifully-conceived scene changes combine to make the story feel honest, organic and incredibly cohesive. Though some consider Neil Simon’s work “fluff,” de Mayo successfully highlights the laughter and the complexities of the third of Simon’s autobiographical plays. There’s plenty of comedy for sure, but Northlight’s production lets us delve beyond the punch lines and into a very three-dimensional family drama that’s anything but pablum.

The two actors at the center of the action—Alistair Sewell as Jay and Sebastian W. Weigman as Arty—are key to much of that honesty. Both young actors are delightful to watch, and Weigman especially understands Simon’s comedy and nuance. There’s a real chemistry between these young men, and it makes their scenes crackle. They clearly enjoy being onstage with one another, and it’s impossible not to enjoy being part of the fun. Likewise, Linsey Page Morton’s performance is something special. She’s both hilarious and heartbreaking as Bella, Jay and Arty’s intellectually challenged aunt. Her sincerity and verve inject every scene she’s in with energy. When Bella’s happy, we’re happy for her. And when she stumbles, we all root for her to overcome.

The terrific cast is reason enough to make the trip to Skokie for Lost in Yonkers, but the production offers a great theater-going experience overall. There’s not a spike mark out of place onstage. A gorgeous set, lovely costumes, and simple but effective light and sound designs work together to create the nostalgic world of the play. Even the theater itself has a great welcoming vibe.

The original production of Lost in Yonkers was mounted in the shadow of the first Gulf War with the idea that the WWII themes of sacrifice, family, and resilience would resonate with early 1990s audiences. Though the script is nearly 25 years old, its story is every bit as relevant today as it was then. With the talent and passion behind Northlight’s production, it’s easy to see why Lost in Yonkers has been and audience favorite for two decades and why it’s destined to live on for decades to come. 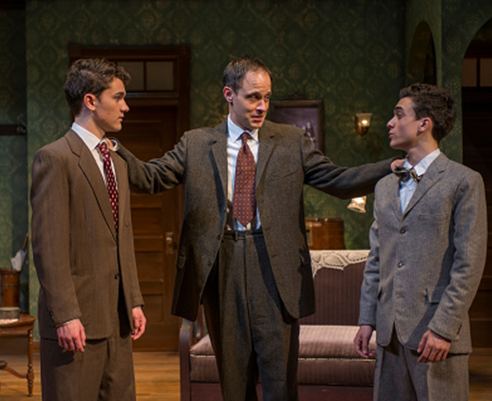