April 29, 2014 - Ordinary people meet with extraordinary tragedy in Shattered Globe Theatre’s production of Mill Fire. Set in 1970s Birmingham, the themes of the play—death and mourning—are evident from the moment the audience enters the theater and is confronted by a Greek Chorus of Widows. As the action begins, we learn of an explosion at the local steel mill that has killed several mill workers, including Champ, the husband of Marlene--the central character.

From that point on, there’s not much more to the story. Marlene struggles with Champ’s death. The other characters struggle with Marlene’s grieving process. There’s much gnashing of teeth about what happened to cause the explosion and whether Marlene’s brother-in-law—a foreman at the mill—is somehow responsible.

Unfortunately, Mill Fire’s script simply doesn’t allow the capable and talented actors in this cast any room to do much more than gnash their teeth and spin their wheels. There’s not a lot of depth in Sally Nemeth’s storytelling or in her characters. The production is filled with gifted performers—notably Rebecca Jordan and Ken Bradley, who give thoughtful, honest performances as Sunny and Bo. Without much to sink their teeth into, they start off at one emotional plane and aren’t given any room to move.

Plot lines that seem to be important in act one (alcoholism, drug abuse) unravel in act two. Sexuality is a heavy-handed metaphor for the fire that is everyone’s ultimate undoing. There’s some fairly provocative nudity that seems to exist only so that the audience has something to talk about after the show since the story is so thin.

Likewise, Nemeth’s use of a chorus is uneven at best. The Chorus of Widows has the potential to add lyricism and poetry to a relatively harsh and difficult theme, but Nemeth’s approach to that conceit is awkward and adds more confusion than clarity. The Widows sometimes speak from Marlene’s perspective, sometimes from their own, and sometimes they play other characters entirely.

The storytelling choices are inconsistent, so the audience is left perplexed. Again, the performers in the chorus are fine actors without anywhere substantial to put their efforts.

To her credit, director Sandy Shinner moves the piece along quite nicely and creates some lovely stage pictures. It’s clear that Shinner understands what the script should have been, and she does her best to guide it toward that lyrical, narrative place. The actors, too, seem to have a firm grasp on the script’s potential and make strong choices in tone and movement.

Mill Fire is a great-looking production. The environment is interesting, effective, and well-used. The technical elements are equally strong with bold and interesting choices from lighting and sound designers. The show feels very cohesive, overall, and the production team’s successful collaborative process is evident.

No matter how gifted the artists and actors are, however, they simply can’t save a less than adequate script. Shattered Globe definitely has the potential to create some really great theater. Mill Fire just isn’t the vehicle to get them there. 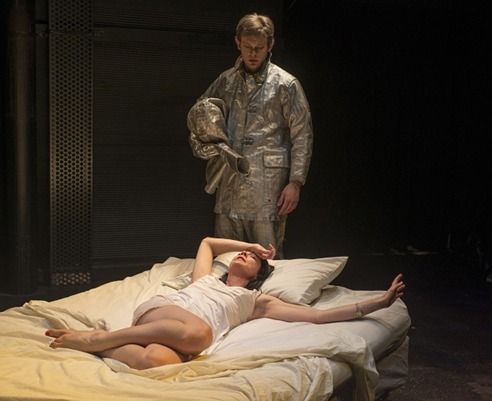