February 9, 2014—While watching a documentary film about a deaf couple expecting their first child hoping the child will be born deaf, British playwright and director Nina Raine found the inspiration for her latest stage play. “We all want our kids to display some sort of aspect of ourselves, because in a way, there's ego and vanity in having children and creating your own dominion.” No more is this evident than in her latest work, Tribes.

Playing at the Steppenwolf Theatre, Tribes peels back layer after layer of the complex family dynamic through an eccentric, intellectual, yet highly dysfunctional British clan. Christopher, played with steely intelligence by Francis Guinan, is an opinionated critic who loves debate. He often finds himself honing his talent for critique through examination of his own family, their careers and life paths. Even his eccentric novelist wife Beth, played poignantly by Molly Regan, isn't spared his opinion.

Steve Haggard, in a fearless Steppenwolf debut as Daniel, was at times breathtaking as the eldest son moved back home to work on his graduate thesis. The thesis deals with language and its meaning. Yet Daniel's progress is sometimes hindered by the voices in his head.

Helen Sadler showed a broad range as Ruth, the loving daughter that fancies herself an opera singer. And, of course, there's Billy. John McGinty was striking as the son born deaf but taught, very intently, by his parents to read lips. His whole identity is even based on his prowess at this skill. Billy's world, along with the rest of his family, is turned upside down when he meets Sylvia. Given a gripping visceral edge by Alana Arenas, Sylvia is a fun-loving girl experiencing the progressive loss of her own hearing. Her parents were born deaf, so Sylvia is very proficient in sign language, and after they become a couple, she proceeds to teach Billy to sign, effectively exposing him to “deaf culture.” This sets off a tug of war that unhinges the family bond as Christopher and Beth raised Billy to read lips so that he would appear “normal.”

The characters in Tribes seem to struggle very heavily with their own internal issues, which are compounded by Billy's growth as he refuses to continue to be the “disabled” family member behind which they can all rally.

The problem so adequately underscored in Tribes is that everyone wants to be heard but no one wants to listen. Austin Pendelton's taut direction conveyed nicely the longing and desire to truly be heard. In order to be heard, though, someone has to listen. Tribes explores that quest and through wit and intellect, it holds up a mirror and forces you to listen. 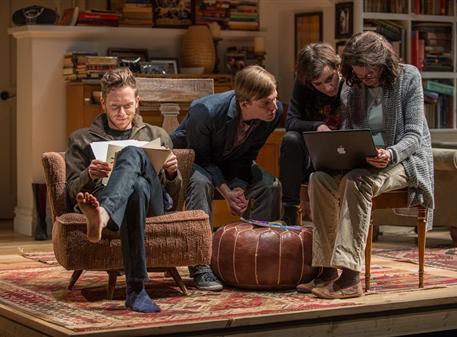