This winter, in association with Shattered Globe Theater, Theater Wit's Jeremy Wechsler will mount a new production of playwright Will Eno's latest work, The Realistic Joneses. His fifth collaboration with the prolific playwright, the work is a sobering take on marriage, friendship and the lies we tell ourselves, and each other, to manage it all.

​Playwright Will Eno is an enigmatic and prolific artist whose output is as lyrical and poignant as it is sharp and taut. An immensely gifted playwright called by The New York Times, “a Samuel Beckett for the Jon Stewart generation,” Eno’s work has resonated so supremely with the brassy, authentic aesthetic of Theater Wit artistic director Jeremy Wechsler that Wechsler has taken to collaborating with the playwright five times. The latest is a charming work named by the Times as among the “25 Best Plays Since Angels in America.” Entitled The Realistic Joneses, the work is breakout Broadway hit that explores the tense and terse ironies of unspoken love and what possibilities may result.

Weschler’s collaborations with Eno have spanned a wide range of works, but one through-line the director points out is Eno’s talent for writing precisely for the live stage, something not always a given in theater. Wechsler explained, “Will’s great draw is that he writes wholeheartedly for the theater, by which I mean that he constructs language with specific attention to the underlying reality in the room. We are always an audience listening intently in real time with a focused attention television can barely imagine and an immediacy that movies cannot achieve. As such, the structure of Will’s dialogue and humor embraces the fleeting, transitory nature of each of those tiny exchanges between the performers and those of us out here in the dark. Each line of dialogue sets up expectations and subtly breaks them; his plays are a series of surprises embedded into micro-interactions.”

​Eno’s propensity for surprise, Wechsler notes, is “one of the rarest and most powerful elements in the arts.” With media saturation at its highest in our society’s history, (the average American spends nearly 12 hours a day consuming media content), Our brains are quite adept at anticipating narratives running a step or two ahead of each moment just to keep up. Wechsler explains, “What Will’s writing does is reset this anticipatory instinct, not by being inscrutable or obscure, but through a wry appreciation of language and common humanity.

Common humanity is something of a focus for The Realistic Joneses. The play follows Bob and Jennifer Jones and their new neighbors, John and Pony Jones. Two couples who share much more in common than their last names, from the mundane to the sublime, the Joneses must muddle through what Wechsler calls the “small beauties,” of each day. Through sharp wit and turns that are at once quirky and yet compassionate, Eno traverses the management of those immense fears and incredible highs of marriage and friendship and the inadequacy and unbelievable sufficiency of them both.

​In much of Eno’s previous work, theatricality becomes the device by which he delivers poignant messages of truth and gravity. For Wechsler, though, The Realistic Joneses is a slight departure from that approach. Its truth comes more simply, candidly, in your face and without subtext. In The Realistic Joneses, he explains, “simple life truths are what drive (the) characters. ‘Am I sick? Will you leave me? What’s for dinner? Your eyes are pretty.’ It’s going to be fascinating to work on and see, because I want to know how the truth he’s been developing in his more presentational work can really deepen the more familiar representational experience audiences know.”

Bringing that experience to the live stage takes more than just a working knowledge of the textural and literary subtext of Eno’s work, however. It takes a collective of talented artists who can at once connect to the language and a creative team that can work seamlessly to bring Eno’s vision to life. For that Wechsler opted to work with Chicago’s Shattered Globe Theater, a group with whom he’s also had a wealth of working experience.

“As soon as Will sent me a copy of the play in 2012, I thought of Shattered Globe,” Wechsler told me. “The Realistic Joneses is such a lovely and detailed portrait of marital communication, how couples bend in the face of tragedy, and an acknowledgement of how lonely we can be, even when surrounded with others. The play struck me as a real opportunity to work with actors who were so well grounded in modern realism. Partially due to Will’s reputation for being (theatrical), there is a real temptation to charge down a rabbit hole of artificial behavior. This is always a mistake in his shows, but it’s instantly fatal in The Realistic Joneses.

“The emotional impact of Joneses relies on a deep identification with the two couples. The comedy will work, regardless, but for that deeper connection, I wanted our version grounded hard in the best acting traditions here in Chicago: honest, raw, working class. That is practically the definition of Shattered Globe’s ensemble.”

Wechsler reached out to Shattered Globe artistic director Sandy Shinner with the project and immediately the two organized a table read with the company. Within days the collaboration was set and Wechsler was determined to produce the show at Theater Wit. The show, of course, got a stunning world premiere starring Steppenwolf’s Tracy Letts in a Yale Repertory Theatre production. The production then transferred to Broadway and the rest is history.

The collaborative chemistry of Wechsler’s design teams are always essential to the success of a production, and this team, Wechsler told me, offers the closest thing to an ensemble feel, the director gets in his work at Theater Wit—a collective of small, gritty theater companies. “Most designers do multiple shows with me over the years,” Wechsler explained. “and this establishes trust and a rhythm to our work that really lifts the artistry of the product.”

​Wechsler will be the first to tell you that supporting the artistic caliber of his productions begins will navigating a cohesive design team’s management of logistics to perfection.

“It’s really fun watching set designers figure out how to conquer some of the crazy logistical challenges these plays can present,” Wechsler explained. “Joneses essentially alternates between a full backyard and a full kitchen location; we have a 32-foot span and no wing space. Plus, at a pacing level, I don’t want more than 25 seconds between scenes. I also don’t like watching actors move furniture around. So, how to turn a backyard into a kitchen, then a backyard, then a kitchen? Then, we have to add in all the other aspects of a design that turns into an artistic product instead of a mechanical solution, right? At the first meeting I took a fair amount of pleasure in tossing this problem into the lap of my old friend. Jack’s face was a mixture of joy—because he agreed aesthetically—and bafflement —because that job seemed initially impossible.

​“Was I worried? No, because I know Jack’s work, and could trust his ability to gracefully marry the practical considerations with the themes of the play. He started with the play’s own interest in isolation and loneliness, creating a puzzle box approach to the scenery which has never been tried in the space, while simultaneously deepening my understanding of the play.”

And that’s often the crux of moving from design as a technical solution to design as a component of the artistic ensemble. Says Wechsler, “A good design team isn’t just executional. People like Kris, John, Hailey, Jack and Vivian bring a world to the script before I ever get to work with actors. This world they carry into the production influences every moment I read and changes the play for me before I hear a single line spoken aloud.”

​But one aspect of execution Wechsler insists he doesn’t have to grapple with in Eno’s writing is pacing the delivery of the many elements the writing packs into his tightly woven script. In fact, he eschews the approach of drawing out a scene to labor intensively over conveyance of every single emotional element. For that he trusts his actors and more importantly, his audience. “I think the temptation is always to slow the play down,” Wechsler explained, “Chicago actors are experts in filling every small moment, and allowing every emotional transition to play through their bodies. This is the legacy of 1970s Steppenwolf, who taught a generation of actors through example.

“This is essential work. It needs to be done, but only so the actor can keep physically connected to the life they are experiencing on stage. The challenge is to then speed up this analytical work to play out in real-time reaction speed, which is measured in microseconds. The performers’ fear is always that they will leave an audience behind. But I believe in the audience. I believe in their intelligence, their narrative sophistication, their willingness to open themselves up, given a chance. Trust the viewer. The audience can process insane amounts of information in a flash. If they get left behind, it’s not because you didn’t show them all the emotional steps, but that the setup of the character and the situation causes a spasm in their trust. I never want to the audience to say ‘What? That person would never say that.’ I do want them to ask ‘What will happen now that that person said those things?’"

​Pace is, after all, one of the key elements essential to the authenticity Eno builds into his scripts, and Wechsler, better than most, understands that. “This dynamic of speed and honesty is core to how I interpret Will’s dialogue. The lightness, speed and rapid turns of his writing establishes a response dynamic in our bodies that opens us up emotionally.” Wechsler jokes that this “performative kinesthetics” waxes esoteric, but it is essential to understanding his delicate handling of the comprehensive mix of techniques required to present Eno’s work without a filter that renders it experimental.

At the end of the day, Wechsler has high hopes that the communicative elements of this touching work (esoteric or not) delivers Eno’s real message of compassion (for both fidelity and infidelity), “for the ways in which we lie to ourselves, to our spouses, and each other while being impossibly kind.”

​After a moment’s thought, Wechsler revises his expectations, “The play ends with a single word sentence,” he tells me. “If it goes the way I hope, it will end with tears and a smile. That’s probably enough.”

The Realistic Joneses opens at Theater will in Chicago's Uptown January 11, 2019. 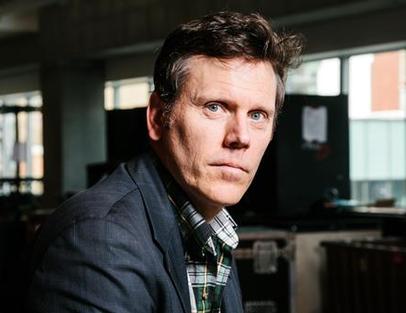