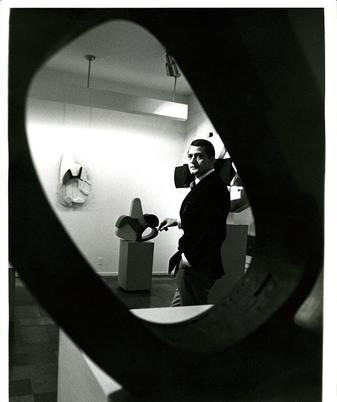 This past spring, Chicago’s McCormick Gallery acquired the life's work of Swiss painter, sculpture and graphic designer Fred Troller. Co-representing the estate with New York’s  Vallarino Fine Art, the gallery will launch its first exhibition from the acquisition introducing the artist on September 17 from 4 to 7 p.m, continuing through October 29. The show will feature art from the late 1950s to the artist’s death. Works from the collection will also be on display at Expo Chicago, September 22 to 25 at Navy Pier.

Born in Zurich, Switzerland in 1930, Fred Troller graduated from the Kunstgewerbeschule there in 1951. He was of the generation that developed a new approach to the graphic arts, termed the "Swiss Style," and based on principles from both the German Bauhaus and Swiss artists working in Zurich and Basel. In 1961, he accepted a position in New York as head of the Geigy design team. Geigy was a Swiss based pharmaceutical firm that, under Troller's leadership, became a forerunner in innovative advertising and graphic arts promotional material. Over a long career, Troller applied his sharp aesthetic to a wide range of artistic endeavors including sculpture, painting, drawing and the graphic advertising arts. Beyond his studio practice, he also taught and lectured widely including at Cooper Union, Rhode Island School of Design, School of Visual Arts, Dartmouth and Alfred University.

Fred Troller – Swiss Modernist in Gotham: Evolution of Form, a comprehensive book on Troller, is in production for release later this year.

For more information on the exhibition, visit thomasmccormick.com.