Tools of the Trade

​Imagine being in the room when Orson Welles typed out the first draft of his iconic cinematic classic, Citizen Kane, a writer at one with his instrument creating literature that would go on to impact a generation of filmmakers. For those inspired by Welles’ writing, the moment is chill-inspiring. Or perhaps consider Ernest Hemingway, typing away The Old Man And The Sea, moments in literature that helped create classic works that would stand the test of time. They help to inspire those that come after them to walk in some way in their footsteps. These moments, disparate though they were, shared a common element, a creator at work with their instrument. The relationship between a writer and their instrument is as personal as they come. The vehicle by which an artist achieves their contribution to the world at large must have a very special, personal connection to that writer’s gift.

On view at the American Writers Museum, a new exhibition, Tools of the Trade, makes the connection to iconic American authors, poets, screenwriters, playwrights and journalists via the instruments with which they made their contributions. The one-of-a-kind exhibit offers a singular look into the contributions of Gwendolyn Brooks, John Lennon, Tennessee Williams, Truman Capote, Hellen Keller, Maya Angelou and more, all through the tools they used to make them.

Writers and their instruments offer a singular look into the process and output for each of these iconic writers within American literature.

The idea for the exhibition first materialized when L.A. based collector Steve Soboroff contacted the American Writers Museum about displaying his collection of typewriters for the first time, many from the most iconic writers, journalists and playwrights in American literature.

​Not only functional, but in pristine condition, these typewriters serve as touchstones creating a nexus between visitors and the writers who inspire them.

Inspiration, after all, is what led these writers to leave for us the work they have. These instruments, the very ones these writers used, serve as points of connection between these masters of the written word and their genius.

​The exhibit pairs typewriters with photos and, in some cases,  ephemera of the writers themselves. The visual is a stunning array of the most prolific writers in American history. It includes Orson Welles’ Underwood Standard Portable pared with one of his iconic scripts;  a photo of Ernest Hemingway as a young child in Michigan alongside the novelist’s trusty Royal Quiet Deluxe; Truman Capote’s famous hat next to his Smith-Corona; and Sandra Cisnero’s own Smith-Corona next to one of her letters describing just how she used typewriters for poetry.

It’s a real thrill for those who love literature observing the very instruments used by these iconic writers to produce such time honored contributions.

​"The iconic works these typewriters gave birth to transcend generations," says Carey Cranston, American Writers Museum president. "Never before has such a diverse collection of writing tools been assembled in one place for people to view up close. Fans of literature, music, journalism and history are in for a moving experience."

The exhibit displays Frederick Douglass’ inkwell and pens, Helen Keller’s braille writer and other artifacts owned and used by featured writers, poets and other artists.

What each instrument says about the writer it represents is individual and distinct, but make no mistake, they each say something very personal and valuable about their owners and something of what made them tick.

Some machines speak to the practicality of their use in the writer’s lives. Gwendolyn Brooks, for example, was a professional typist for a time, so her machine (Hermes Rocket) was one of the best and lightest typewriters available. Said Christopher Burrow, director of operations for the museum, “Only someone that relied on making money directly from their typing output would choose such a well crafted typewriter, in my opinion.”

Portable typewriters meant that the writer was perhaps quite mobile, such as Jerry Siegel typing away on train rides to New York with his Royal. Then there is a great photo of Hugh Hefner at his desk with his typewriter and files of subjects that he was writing about, so in the exhibition visitors can really get a sense of someone in their work environment, setting a distinct context for their output.

​But these instruments represent so much more than a time or context for some of the greatest works in American literature. The inspirations for some of the country’s most iconic writers, their personalities are all ostensibly wrapped up in the instruments they used on a day-to-day basis. Said Burrow, “I see these tools as extensions of the writers that used them. Visitors will hopefully picture the writers hunched over the keys click-clacking away at their work and they will get the same sense of awe that prompted Steve Soboroff to begin collecting them.”

For most, the potency of the machine on display will be matched only by the import of the writer it represents. Maya Angelou's typewriter was an electric Adler and Soboroff bought it at auction missing its power cord. For him, whether or not it worked didn’t matter as much as the fact that she created her work on that machine. In all the time he had the machine, he’d never tested it out. “Once at the museum, we were curious as to whether the Adler worked or not,” explained Burrow. “So we contacted Steve and he let us get a cord and plug it in to see. In a tense moment we plugged it in and it powered up and most all of the keys worked, and then we were overcome with amazement at the fact that we were probably the first to use it at all since she had. It was a magical moment.”

​Besides sharing some of Steve's collection with visitors here in the Midwest, the exhibit represents an opportunity to inspire the next generation of readers and writers. “We want visitors to consider the process of writing and how it changes with time and technology. During our field trips I try to stress to students how people that used typewriters had a different editing process that what we have today. There was very little editing on the fly, so to speak, there were multiple drafts and rewrites. You should see the kids' eyes bug out when I explain the origins of 'cut and paste.”

The typewriters spark a conversation about the marks these writers made on American literature. For many visitors, they spark the same curiosity that Soboroff originally experienced when he purchased his first typewriter. For him that inspiration led to his collection upon which this exhibition is largely based.

To further enhance the experience, visitors will be able to create their own works on exact replicas of some of the typewriters on display and include it in the museum’s Story of the Day exhibit.

​Visitors can also enter to win a typewriter of their own through the Typewriter Photo Contest. To enter, visitors need to share a photo of themselves at a typewriter — either one at the museum or a personal one — on social media by June 30 and use hashtag #ClickClackAWM. One lucky visitor could take home a 1949 Smith Corona Sterling, a beautiful, fully-operational machine that has been meticulously restored and maintained. And don’t worry, it still has that lovely old typewriter smell.

​Tools of the Trade will be on view at the American Writers Museum through June 20, 2020. 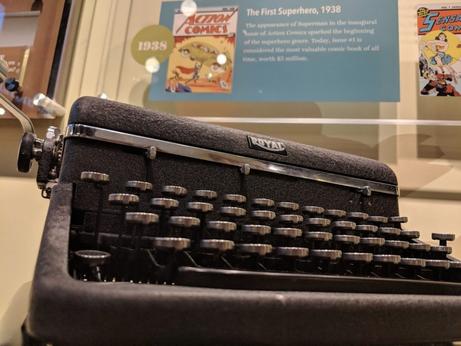