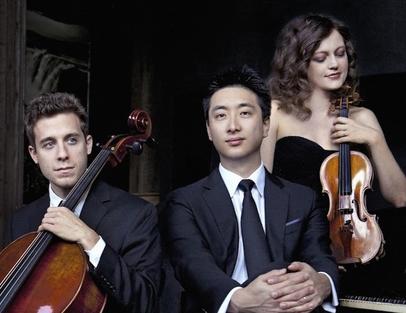 Called “One of the best young chamber groups around today” by violinist Philip Setzer of the Emerson String Quartet, Trio Céleste has become one of the most active, enterprising and exciting piano trios on the classical music scene. The group debuted in Chicago in November 2017 on the Dame Myra Hess Memorial Concerts series at the Chicago Cultural Center. Now, they return to Chicago in January 2019 as part of UChicago Presents 75th anniversary season.

Begun in 2012 and named for the rare celestial occurrence on the night they met (the largest harvest moon in two decades), Trio Céleste has become one of the emerging chamber ensembles making a name for themselves today, winning prestigious competitions and awards around the world. The group have also become leaders in musical entrepreneurship, commissioning and recording new works and heading Chamber Music | OC, a performance, education, and community outreach nonprofit in Orange County, California.

In January 2019, the trio brings their passion for performance, education, and community to the University of Chicago with a slate of engagements on January 9, 10 and 11. Capping the their visit is a performance in the University’s Mandel Hall as part of UChicago Presents’ Classic Concerts series. The three offer a program built on the themes of honor and tribute. Rachmaninoff’s Trio Elégiaque, the first work on the program, memorialized Tchaikovsky with a style reminiscent of the elder composer, and the second work of the night by American composer Pierre Jalbert is a tribute to the life and work of Mother Theresa. Tchaikovsky’s own Piano Trio in A Minor, Op. 50, “A la mémoire d'un grand artist,” is dedicated to the composer’s close friend, pianist Nikolai Rubenstein.

​​ On Thursday, January 10, the trio visits classical radio station WFMT (98.7 FM) for an Impromptu performance over the noontime hour (which can also be heard on air or on the station’s online stream at wfmt.com), and they bring their educational work to the University of Chicago in a masterclass for student ensembles from the Department of Music’s Chamber Music Program. As an added treat, on Wednesday, they also offer a concert for patients and staff at the University of Chicago Medical Center.