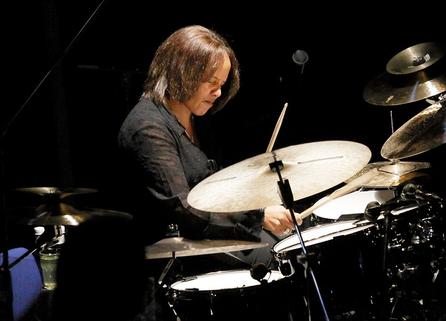 On Thursday, January 26, 2017, at 7:30 p.m., the University of Chicago Presents will host Grammy Award-winning artist Terri Lyne Carrington at the Reva and David Logan Center for the Arts as the third performance in the 2016/17 Jazz at the Logan series.

​Widely known as a talented drummer, composer, and singer, Carrington is “full of ideas, as well as the skill and sophistication to realize them” (NPR). Here the innovative all-star will play her version of Money Jungle, the famous 1963 record by Duke Ellington, Charles Mingus, and Max Roach.

​The program, titled Money Jungle: Provocative in Blue, earned Carrington a Grammy Award for 2014 Best Jazz Instrumental Album, making her the first female artist to win in the category. Previous winners include Count Basie, Chick Corea, and Herbie Hancock, among others.

​Carrington has performed on many recordings throughout the ‘80s and ‘90s through today. Notable examples of her work includeHerbie Hancock’s Grammy Award-winning CD, Gershwin’s World, where she played alongside Joni Mitchell and Stevie Wonder. She has toured in many of Hancock’s musical configurations (from electric to acoustic) and is featured on his Future2Future DVD.

​In 2013, Carrington released Money Jungle: Provocative in Blue, her much anticipated homage to Duke Ellington, Charles Mingus and Max Roach, to coincide with the 50th anniversary of the release of their iconic 1963 Money Jungle album. The recording featured Gerald Clayton and Christian McBride, with guests Clark Terry, Lizz Wright, Herbie Hancock, and others. Carrington made history when she became the first woman to win a Grammy Award for Best Jazz Instrumental Album.

Jazz at the Logan is a series dedicated to building and enriching the jazz community. It exemplifies UChicago Presents' mission to increase community access to all types of music. Partnerships with Chicago organizations complement Jazz at the Logan's world-class jazz performances.

The 2016-2017 season of Jazz at the Logan includes the three-concert Chicago Stage at the Logan series, featuring pre-concert events in partnership with The Jazz Institute of Chicago.

​For more information about the upcoming concert, visit chicagopresents.uchicago.edu/events/schedule.

Grammy-winning artist Terri Lyne Carrington will perform January 26 at the Reva and David Logan Center for the Arts as the third performance on the Jazz at the Logan Series by UChicago Presents.