The Thistoric Uptown Theatre on Chicago's north side (photo courtesy of the Architecture Foundation). 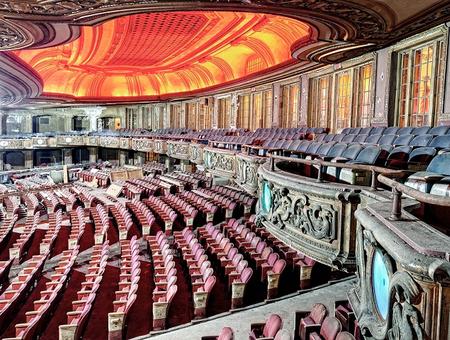 ​“The Uptown Theatre is more than a theater. It’s an iconic community anchor,” Mayor Emanuel said. “The restored building will be the centerpiece of the new, revitalized entertainment district that will attract hundreds of thousands of show-goers while promoting continued economic growth for the surrounding neighborhood.”

Up to $13 million in Tax Increment Financing (TIF) assistance approved by the commission will help rehabilitate the 93-year-old, Spanish Revival-style building as a 21st century entertainment venue.  The restoration efforts are being led by Jam Productions, one of the region’s largest concert promoters, and Farpoint, an experienced Chicago-based real estate developer.

“The Uptown Theatre is one of the greatest theaters in America, and it’s the premier property in Uptown. Its restoration will be expensive, but the theater is a treasure that must be saved,” said Jam co-founder Jerry Mickelson. “Assistance from all levels of government – local, state, and federal – is necessary to get this project over the finish line. Future generations will not forgive those who do not save this magnificent palace, because a venue like the Uptown Theatre will never be built again.”

​Added Farpoint Development Founding Principal Scott Goodman, “The Uptown Theatre restoration is the most culturally important project we have undertaken. Farpoint is thrilled to be involved with such a transformative project.”

The TIF assistance will be provided through the Lawrence/Broadway TIF district, which was established in 2001 in part to help fund the building’s restoration. Additional City financial assistance is anticipated to include $14 million in PACE financing and $3 million in Adopt-A-Landmark funds.

With “an acre of seats” served by three separate lobbies, the Uptown was the world’s largest theater building when it opened in 1925. Designed by architects Rapp and Rapp for operator Balaban and Katz Corp., the Uptown was used for stage shows, movies and special events into the 1970s, when it was primarily used for touring musical acts. The theater last hosted a concert on Dec. 19, 1981, by The J. Geils Band. Since then, the building’s interior spaces have been periodically used for film productions.

Interior improvements are expected to include new elevators, concessions, building systems and related work that will increase capacity from approximately 4,100 to 5,800 people. Exterior work will repair the building’s masonry and terra cotta and improve marquees and related signage, among other repairs and improvements.

The Community Development Commission also approved the sale of a 31,000-square-foot, City-owned parking lot at 1030 W. Lawrence Ave. for $1 to support theater operations following the completion of the planned reconstruction of the adjacent CTA Red Line station.

Additional funding sources for the theater rehabilitation include $30 million in equity, conventional financing or charitable contributions, and $10 million in Build Illinois Bond funding.

​“The renovation of this magnificent theater has been my number one priority since I was re-elected. The Uptown Theatre restoration will be an economic engine for Uptown, bringing not only hundreds of jobs for residents, but also youth employment training,” Ald. James Cappleman said. “This project will improve the neighborhood for decades to come."

Anticipated to start next summer, the project will create more than 200 construction jobs during the 18-month restoration process, as well as 14 full-time jobs and 181 part-time jobs once the theater opens.

“It’s been more than 35 years since the theater closed to the public, which makes this the most anticipated restoration project in the City’s history,” said DPD Commissioner David L. Reifman. “The Uptown is the last and largest movie palace in the United States that hasn’t been demolished or restored and its re-opening is going to be recognized by preservationists, entertainment entities, cultural organizations and cities around the world.”

The TIF assistance could be introduced for City Council approval later this year.

​The Community Development Commission was formed in 1992 to review and recommend City Council action on proposed TIF district designations, redevelopment agreements, and land sales, among other duties. It is comprised of 15 members appointed by the Mayor and confirmed by the City Council.