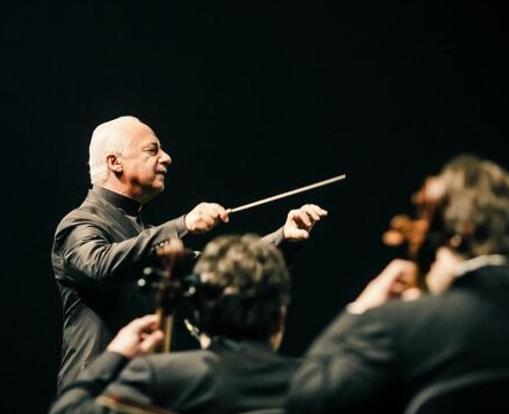 ​The Washington Post has hailed the Virtuosi as “a dramatically unified ensemble” with “a sound that would put many full orchestras to shame.” The program will be comprised of some of the most popular opera and chamber works in the canon. This performance is part of MVCO’s 2017 North American Tour and is presented by the Cherry Orchard Festival Foundation (CherryOrchardFestival.org).

The MVCO, under the baton of Maestro Spivakov, will be showcased in the first half of the program which will open with Mozart’s Divertimento No.1 in D major, K.136 to be followed by Shostakovich’s Chamber Symphony in C minor Op. 110. 14-year old cello virtuoso Danielle Akta (Israel) will then join the orchestra for Bruch’s Kol Nidrei op. 47 for Cello and Orchestra and Popper’s Concert Polonaise, Op.14 for Cello and Orchestra. Following intermission, the Hibla Gerzmava will join MVCO for the performance of “Casta Diva” from Belini’s opera Norma; “Stretto of Amalia” from the Verdi’s opera I Masnadieri; along with a wonderfully engaging slate of arias and songs spanning composers from Polenc to Grieg to Gulda.

Vladimir Spivakov is renowned throughout Russia as the founder and director of the Moscow Virtuosi Chamber Orchestra and the National Philharmonic Orchestra of Russia. He's recognized worldwide for his performances as a recitalist, guest soloist and guest conductor of leading orchestras, as well as his humanitarian activities. Maestro Spivakov has also performed with numerous orchestras under such conductors such as Bernstein, Solti, Ozawa and Abbado, among others.

Spivakov founded the Moscow Virtuosi Chamber Orchestra in 1979. Every year the orchestra performs more than 100 concerts, the majority on tour with stops in locations like Russia, US, Turkey, Israel, China and Japan.

Performances are marked by a clear desire for excellence an essentially European approach to ensemble performance, a distinct concern for detail and nuance, attentive and creative interpretation of a composer’s vision and a deep love for the music performed.