From May 8 – May 20, 2018 this spring, the Madison Square Garden Company will bring one of the most popular family musicals to The Chicago Theatre (175 N. State Street), The Wizard of Oz.

​This fanciful production is a celebration of the classic 1939 MGM movie, and will be presented with striking special effects designed to sweep audiences away from the moment the tornado twists its way into Kansas. Featuring the classic songs composed by Harold Arlen with lyrics by E.Y. Harburg, “Over the Rainbow,” “Ding Dong the Witch is Dead” and “If I Only Had A Brain,” along with the beloved characters, The Wizard of Oz offers the kind of live theater magic families flock to.

Leading the cast as Dorothy is Kalie Kaimann. She previously played this role for the Children’s Theatre of Cincinnati and has also performed as Bonnie in Anything Goes.

Toto will be played by Murphy, a white Brussels Griffon/Cairn Terrier mix with scruffy fur and an adorable underbite. Murphy was rescued on February 5th, 2016 from the ASPCA in Chandler, AZ by Lizzie Webb (music director for The Wizard of Oz tour) and was quickly welcomed into the theater world. He got his start as a trusty backstage companion, a pit orchestra puppy (sleeping at mom’s feet while she plays piano and conducts shows) and within a few months of adoption he was onstage as Willoughby in Mary Poppins. This will be his second time playing Toto. He even has his own hashtag.

Tickets for the production are available online at www.chicagotheatre.com and are also available at The Chicago Theatre box office, all Ticketmaster outlets, and Ticketmaster phone charge. 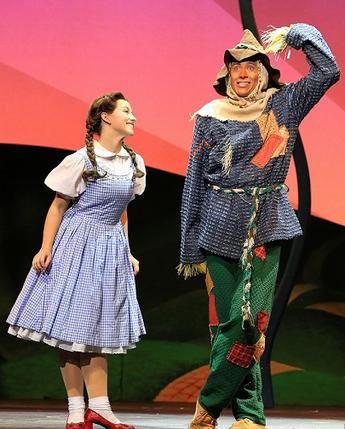 The Wizard of Oz National Tour Coming to Chicago Theater