“Our new building ensures that Writers Theatre becomes part of the permanent landscape of the Chicago cultural community, taking its place alongside the nation’s leading dramatic institutions,” said artistic director Michael Halberstam. “After more than two decades of theatrical productions, Writers Theatre is on the path towards establishing a world-class theater center for artists that will serve hundreds of thousands of patrons and provide educational resources for students for generations to come.”

The On to a New Stage Campaign, which raised funds for the initiative, has raised $26.5 million toward a $31 million base campaign goal. The project cost includes: theater center design and construction, transition costs, and an operating reserve. Writers Theatre also plans to grow its cash reserve fund to $3 million. The company will continue to raise funds for named gifts through 2015, and also is planning a broad-based fundraising effort in 2015.

The 36,000 square foot theatre center, located on the site of the former Woman’s Library Club of Glencoe, is designed to achieve LEED Gold certification. Among the key features in the new center are: a 250-seat Alexandra C. and John D. Nichols Theatre purposefully designed to maintain Writers Theatre’s trademark intimacy; the Gillian Theatre, a 50 to 99-seat flexible theater space; a “Theatre in a Park” atmosphere, with patron access to surrounding parks, outdoor rooftop terraces, landscaped and rooftop gardens, and beautifully integrated views of existing parks to the east and west; a spacious main lobby, with many patron amenities; and a luminous grand gallery walk, structured entirely from wood by renowned engineer Peter Heppel, suspended around the lobby and serving as viewing area and “front porch” to the building.

“Writers Theatre’s new center will strengthen Chicago’s North Shore as a national destination for culture, and we look forward to working with our entire community to make it a reality,” said executive director Kate Lipuma. “Our new home is being created in partnership with the Woman’s Library Club and the Village of Glencoe, and I am extremely proud that our project has already received a prestigious National Endowment for the Arts ‘Our Town’ grant, which recognizes civic collaborations that revitalize their communities through the arts by attracting visitors to performances, restaurants and shops.” Over the past twenty-two seasons, Writers Theatre has developed a national reputation for superb regional productions. Under the artistic leadership of Michael Halberstam, Writers Theatre has been deemed the “best drama company in the nation” by The Wall Street Journal. The company, which plays to a sold-out audience of 35,000 patrons each season, has garnered critical praise for the consistent high quality and intimacy of its artistry.

For more information about the company’s ongoing fundraising efforts, including the On to a New Stage Campaign visit writerstheatre.org. 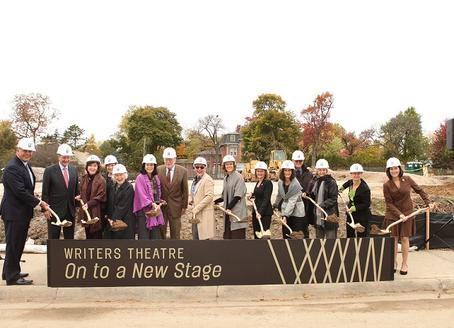