Legacy, love, jealousy and passion are intertwined in Writers Theatre’s current production of Isaac’s Eye. This creative interpretation of the life of a young Isaac Newton brings the story of the famed scientist to the live stage through compelling storytelling that allows the audience to immerse themselves in both the history of this remarkable man and the drama of his life.

Though many folks may know Newton only from their class textbooks, his story is a far more interesting one that what was told in the dry lectures heard in many high school classrooms. Just like most human beings, Newton had relationships, dealt with disappointments, worried about his purpose in life and questioned the world around him. His science is what we remember, but his humanity is just as fascinating—if not more so. Isaac’s Eye reminds us that there’s drama in science—both in the work itself and in the lives of the scientists doing the work.

Some of the drama in this production comes from things that are known to be true about Isaac Newton. And some of the drama is also simply imagined by the playwright. Though fact and fantasy are combined in Isaac’s Eye, separating truth from fiction is incredibly easy in this instance. Playwright Lucas Hnath ties much of the play’s historical detail to footnotes that are literally written out on walls for the audience to read as the action progresses.

Though this conceit is explicitly required due to the structure of the script, director Michael Halberstam says this concept has been anything but a constraint for him and the actors. “We followed the playwright’s suggestions and ended up really enjoying the challenge,” explains Halberstam. “We absolutely spent time in rehearsal making sure that we were able to execute the idea without being distracting, particularly if writing on the wall was happening at the same time as crucial storytelling. Fortunately, I have an amazing cast and they developed a tremendous sense of ensemble and were all very sensitive to each other’s actions.”

Equally challenging are the words themselves. Hnath’s script is an incredible blend of rhythm, verse, prose and punctuation. “The text is complex and highly specific,” says Halberstam, “and any variation from the written word and the rhythms of the text (pauses and silences, for instance), which are painstakingly crafted, would tend to throw the scene off balance at first.  So we spent a fair amount of time in rehearsal getting precise with the text.”

The text is, indeed, challenging, however in no way do the highly stylized elements of the play keep the viewer at a distance. Instead, all of these very specific details somehow manage to draw the audience into the story of this man and his myth. Rather than distilling the stuffy lectures of high school, Hnath takes us into the cool teacher’s classroom—the teacher who magically makes science and history relatable and important. It’s thrilling, really. We’re no longer bogged down in the dogma that surrounds Newton’s Laws. Instead, we’re drawn into the intrigue of Newton’s life, thanks to a little insight and imagination.

Newton was just a man—albeit a brilliant man—doing what he loved. Everyone can understand that. In creating such specificity of character, place and design, Hnath has created a world in which the audience can appreciate the nuances of Newton’s life and gain renewed appreciation for his science.

Writers Theatre takes things a step further in making the audience part of the world of the play due to some very creative choices with their performance space. Currently, in the midst of building a new arts center in collaboration with the Woman’s Library Club and the Village of Glencoe, Writers Theatre is celebrating its roots and performing in its beloved bookstore theater at Books on Vernon. With only 61 seats, the intimate setting lends itself to allowing the audience to get close to the action and cozy with the characters.

Performing at this venue has been ideal for Isaac’s Eye, says Michael Halberstam: “One of the many magical aspects of our Bookstore Theatre is how it keeps transforming, and just when we think we’ve found every possible configuration, we find another new one.  This one is definitely new!  Our set designer and lighting designer, Collette Pollard and Keith Parham, were particularly drawn to the idea of creating the feel of an operating theater and lecture hall.  Interestingly enough, the playwright said he had always thought the play should be physicalized in this way.  So it turned out to be the perfect configuration for the play….”

Writers Theatre has developed a strong reputation for itself by producing classic work in intriguing ways and by creating exciting contemporary pieces, too. Isaac’s Eye is the absolute best of both worlds. It’s not exactly classic nor is it exactly contemporary. It transports us to the 17th century, yet it allows us to remain grounded in 2014. It makes us question the things we know are true while confirming that some things simply never change. Isaac’s Eye is the story of a legend and the story of ourselves. In short, it’s what a really good play should always be.

Isaac’s Eye runs at Writer’ Theatre in Glencoe through December 21. 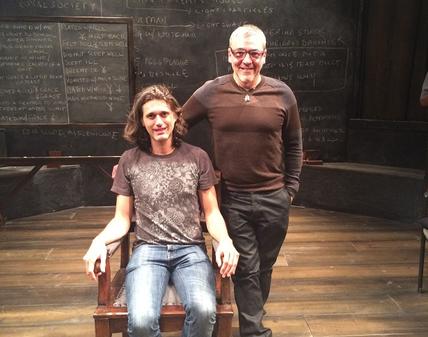 From the Winter 2014 Issue of
Clef Notes Journal