Architectural rendering of the concourse of the new Writer's Theatre Theatre Center in Glencoe (rendering courtesy of Studio Gang Architects).

Writers Theatre in Glencoe recently announced the next phase of development of its new Theatre Center: demolition, groundbreaking and construction.  Having raised $25 million of the $31 million base goal for the On to a New Stage fundraising campaign (with plans for an additional $3 million cash reserve), Writers Theatre has hired general contractor W.E. O’Neil to helm the project.

Demolition will begin September 2, 2014 and the construction is expected to be completed by early 2016.  A groundbreaking ceremony will take place in mid-October 2014, with details forthcoming.  Writers will continue to raise funds for named gifts through 2014, and anticipates a broad-based public campaign in 2015. "We are thrilled to welcome W.E. O'Neil as the newest member of our project team, and have great faith in their ability to see us through the construction phase as we create a permanent home for the Theatre," said Executive Director Kathryn M. Lipuma.

"They will be a tremendous asset to the vision that we have created with Studio Gang Architects, and an ideal fit with the expertise provided by the rest of our exceptional team of consultants.  With $25 million dollars raised of our $31 million dollar base goal, and with a top notch contractor on board, we're excited to break ground and begin construction by mid-October."

"We're very pleased to be involved in such an innovative project," noted W.E. O'Neil Construction President, John Russell. "Our partnership with Writers Theatre and Studio Gang is extremely supportive and focused on delivering a world-class building that fosters great performances for years to come." The On to a New Stage Campaign will establish the nationally-acclaimed theater company’s new home – a theater center designed by Chicago’s internationally renowned Studio Gang Architects, led by Founder and Design Principal Jeanne Gang.

The center, to be located on the site of the current Woman’s Library Club of Glencoe, will provide Writers Theatre with two intimate, state-of-the-art performance spaces under one roof, patron and artist amenities, and rehearsal and production space.  The center will ensure Writers Theatre’s future as a cornerstone of the Chicagoland cultural community and strengthen its national reputation.

Writers Theatre will kick off their 2014-2015 season September 2 with Isaac’s Eye, an imaginative new work, in their original venue, a storefront space located in a Glencoe bookstore, where they launched the company 20 years ago. The new Theatre Center will facilitate an upgrade to a 250-seat theater space (up from 180 seats in their larger, Tudor court space), while maintaining their trademark intimacy.

For more information about the On to a New Stage fundraising campaign or Writers’ new season, visit writerstheatre.org. 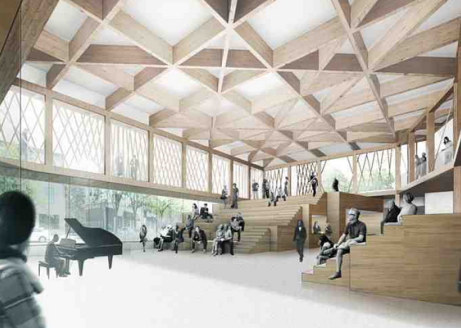