Joffrey Ballet in The Nutcracker, a new tradition based on Chicago at the time of the World's Fair of 1893 (photo by Robert Migdoll)

For generations, The Nutcracker has been a holiday tradition for audiences of all ages. In 2016, Chicago’s Joffrey Ballet gave the work an ingenious makeover and a new setting: the fairgrounds of Chicago’s 1893 World’s Columbian Exposition. Now, WTTW public media has partnered with the Joffrey to produce a new 60-minute documentary, Making a New American Nutcracker, which will go behind the scenes to reveal how it was made and introduce audiences to the A-list creative talents who made it happen. The film will be narrated by actress Neve Campbell, co-producer, co-writer and star of The Company, Robert Altman’s 2003 film featuring the Joffrey Ballet.

Making a New American Nutcracker premieres on WTTW11 and on wttw.com on 8 p.m., Thursday, November 16. The companion website, wttw.com/nutcracker, will feature original content and behind-the-scenes images and stories. The program is also being offered to PBS audiences around the country as part of holiday programming in December 2017.

The Joffrey Ballet artistic director Ashley Wheater gathered together a stellar group of theater artists, including Tony Award-winning choreographer Christopher Wheeldon; Caldecott Medal-winning author Brian Selznick, writer of the book that inspired the Oscar-winning film, Hugo; MacArthur “Genius Grant” recipient Basil Twist; renowned puppeteer and Tony Award-nominated scenic designer Julian Crouch; and Tony Award-winning lighting designer Natasha Katz to reimagine the story of Clara, the privileged daughter of a 19th-century German merchant who falls asleep on Christmas Eve and dreams of a world of sweets. As a result of this new A-list team of collaborators, the classic story evolved into the story of Marie, the daughter of a 19th-century Polish immigrant sculptress – a single mother working on a statue for the World’s Fair – who falls asleep on Christmas Eve and dreams of a completed and fanciful fairground, transforming this European import into a magical American story.

Making a New American Nutcracker takes audiences behind the scenes with these creative visionaries as they work to bring this striking original production to life. They and many of the performers also share anecdotes about the process, in interviews conducted at Chicago’s historic Glessner House and Athenaeum Theatre; The Parsonage, a charming Victorian bed & breakfast in San Francisco; and the American Ballet Theatre and the New Amsterdam Theatre in New York. These include: how Buffalo Bill came to be a part of the ballet; why the dancer who plays the Nutcracker has to play his part mostly blind; choreographer Christopher Wheeldon’s observation that one part of Tchaikovsky’s score is reminiscent of an iconic TV theme song; and the salty advice Wheeldon received from Chicago’s mayor, Rahm Emanuel, a former dancer himself.

The film also explores the history of the ballet, its success in the United States following the Second World War, and the history of the city of Chicago. “I have been honored to work with the talented people at the Joffrey on this unique production,” said the film’s producer, Daniel Andries. “It has been an unforgettable and inspiring experience.”

“The inaugural season of Christopher Wheeldon’s The Nutcracker was enjoyed by thousands in attendance at Chicago’s Auditorium Theatre last winter.  We’re very pleased to have the opportunity to share his labor of love and the story of its creation with audiences in Chicago and beyond,” said Wheater.

“Of course the public pays their money and they see the final picture, but the story behind that story is vast – it’s epic.  And it’s actually almost more interesting than the final production,” adds Wheeldon. 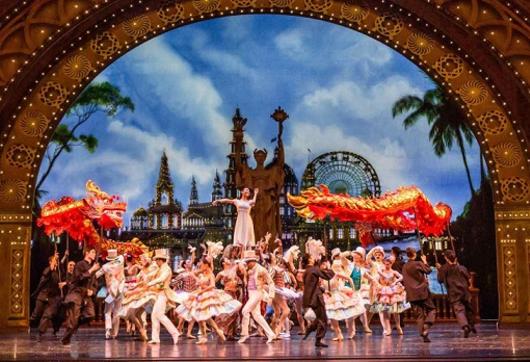