York Furrier Mentorship is Setting the Stage for the Future of Fur Design in Chicagoland. 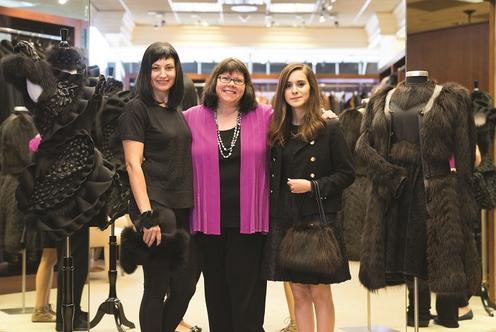 ​Chicagoland's York Furrier is shaping the future of the luxury outerwear industry through an immersive mentorship program for emerging student designers that helps them hone their craft and present their designs to the world, quite literally.

​Throughout the years, Rezny and York Furrier have taken several student designers into her shop and trained them in the creation of fur-based garments. Some of those interns have already competed successfully in various design competitions, including the U.S. stage of the REMIX sponsored by the Fur Information Council of America, of which Rezny is a longtime  member.

The REMIX competition draws entries from more than 1,000 student designers across the globe. Participants compete in regional rounds, and the winners from those go on to meet head-to-head, most recently in Milan, Italy.  Last year, two of Rezny’s interns, Carolina Ramirez and Danielle Grouse, were finalists in the U.S. competition. Ramirez designed a fur walking coat and matching fur-trimmed dress and handbag. Her design was created using feathered Finnish raccoon and intricate woven Italian lamb leather. Grouse designed a striking three-piece garment using red fox fur. She created a cape lined with a Burgundy Twill and matched it with a detachable vest and black wool shorts and trimmed with natural brown beaver applique.

Ramirez returned to York Furrier for the second straight year this summer and is creating another design for the U.S. REMIX Competition. Her new look includes a white mink walking coat with silver fox adornment. She created the garment with the help and guidance of York’s skilled inhouse designers at their Elmhurst store. The piece will also incorporate Swarovski crystals, a touch Rezny notes, gives the garment a “very glam” effect.  Ramirez said she is still developing accessory ideas for the look. When complete she is hoping that lightening will strike twice for her designs at REMIX.

​It was through Rezny and York Furrier that Ramirez became more familiar with fur design. She pointed out that it was not a material she had previously worked with, but she has since begun to love the different options that are available to her in the field. She insists fur is something she intends to incorporate in many of her future designs, particularly as she has learned how to blend different furs into a single garment under the tutelage of York staff.

Through York Furrier’s sponsorship, Ramirez began work in another fur program this summer, but this time in Greece. She is studying with European furriers and designers to gain greater knowledge about the overall industry.

“I’m really excited about this trip,” Ramirez told me earlier this summer before the program’s launch. “I haven’t traveled much, so it will be a new experience. I’m looking forward to all the things I will be learning about fur while I’m there.”

Intern designer Anna Loosli began her tenure at Rezny’s shop in August. Thus far, 2017 has been a pivotal year for Loosli, beginning with an impressive win at the 16th Annual Richard Driehaus Awards for Fashion Excellence. Loosli, a graduate from the fashion design program at the College of DuPage and a student at the School of the Art Institute of Chicago, won the Driehaus top honor for her gothic, architectural, fur-trimmed leather and neoprene dress. After winning the competition, Loosli’s design was presented on display at the iconic Michigan Avenue Neiman Marcus store in downtown Chicago.

In designing her award-winning outfit, Loosli said she had a clear picture of what she wanted to accomplish. Upon entering the competition, she noted she never really considered winning the prize simply because of the sheer number of “really talented designers who entered.” Needless to say, when she won, she was flabbergasted—a feeling she still holds.

​Loosli is looking forward to the continued education she will gain from design experts at York Furrier. She explained that obtaining hands-on experience in constructing the fur and leather garments she hopes to design is essential to her future. She hopes to create more pieces that blend leathers and multiple types of fur. While she prefers coming up with classic pieces someone can wear for many years, Loosli insisted she also enjoys creating small accessory pieces that make a statement with bold colors.

“There are so many colors you can use now, it’s amazing,” she said. “But fur is expensive, so I love designing something that’s going to last for years.”

Rezny described Loosli as a talented designer who has seen many doors open for her since she won the Driehaus competition. In addition to learning techniques of fur sewing and patterning, Loosli spent part of her internship with York Furrier’s communications team to sharpen her social media promotion skills, which in today’s environment is pivotal.

Another designer intern at York this year is Cole Durkee, a Texas native and recent graduate of the School of the Art Institute of Chicago. Durkee actually got his start as a sculptor and illustrator. As he flexed his artistic muscle in school, Durkee discovered a fashion design class where he learned to sew garments. That sparked a love of design, and he began seeking to learn more about the industry ever since.

“I kept falling in love with materials, and I began to see how transformative fur could be,” Durkee explained. “I was really excited by fur and the chance to get to make new things.”

​Durkee quickly began to learn all he could about the different kinds of pelts available—minks, raccoon, beaver, fox and so many more. With a solid understanding of the types of furs used in garment design, Durkee started to create his own designs.

“In terms of what I try to do, (the type of fur) is where it begins,” Durkee explained.

It was through the school that Durkee came to spend about a year working with York Furriers, honing his design skills and gaining even more experience. While at York, Durkee was chosen to create a three-piece collection that was featured in The Hat Magazine and Jute Magazine. The collection  featured Swarovski crystals woven into the design. Additionally, Durkee was tapped to create a custom design for a preferred York client. For that project, he engineered a custom-made intarsia-designed, sheared beaver jacket. As part of his design, Durkee created a stencil for the fur dyers to follow as they meticulously colored the pelts.

Durkee was also involved in assisting Grouse and Ramirez in creating their designs for the REMIX Competition.

He described his design aesthetic as that of a maximalist, looking to blend different materials into a garment, different types of furs and leathers, as well as using different lengths of furs. Durkee said he’s interested in the “classic-not-so-classic” look, meaning he prefers designing coats that are big, warm and utilitarian, but paring them with color contrasts and a variety of textures.

It’s not just coats that he likes to design. He also enjoys creating different clothing accessories, hats, gloves and the like. Those garments call for a bolder kind of flair, Durkee said, which gives way to the addition of bright colors that appeal to those customers seeking a fashion piece rather than a legacy garment.

“With accessories, you can make something more commercial. People would rather have a fun accessory…than fun outerwear,” he noted.

​Working with fur is a special experience. Durkee said it’s important for designers who work with materials like fur to know as much as they can about the pelts and insure they were gleaned from humane trading sources.

As a mentor to the young designers, Rezny said she wants to be a hands-on teacher, helping them understand the ins-and-outs of designing with fur. The students gain a thorough knowledge of the different types of pelts available and how they can be paired together to make exciting garments for customers.

“The students have a broad view of the skins when they come to the shop, but they get a solid education in fur when they begin working at York. They experience the pelts, they touch them and know what works best with what types of designs,” Rezny explained.

The students work with long-time professional pattern makers and learn how to use the on-site sewing machines specially made for stitching in the industry.

“They get a better-than four-year college education in the four-week-long internship here,” Rezny told me. “It’s a great learning experience for the students. We teach them pattern making, and they learn how to order pelts from multiple sources.”

Once the internship at York is over, the students’ learning continues. Many of York’s interns go on to international design houses where they continue to learn about the industry and how to hone their skills. Later this year, York Furrier will send Ramirez to Greece to work with designers there. Durkee will go onto a program in Denmark to learn more. He will also spend some time in London taking business classes in order to learn just how to better market himself as a professional designer.

For Rezny, it’s a chance to support the next generation of fur designers, turning her experience into opportunity for emerging young creators and forging a platform that will take them to the next level and inspire new energy in an industry her brand has thrived in for nearly a century.